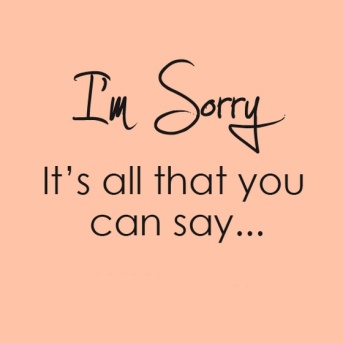 Two words like “I’m sorry” can be the hardest words to say for some people. I’m not sure what makes them be so difficult, but perhaps it’s the idea of having to admit wrong. It means having to step out of your comfort zone and admit that it could have been better. The truth is, many people are either stubborn or even afraid to admit mistakes. We all make mistakes, but there is something humbling about telling someone “I’m sorry.”

The Merriam-Webster dictionary states that to apologize for means to express regret for something we have done. It is an action that takes place where we consider what we have done, an excuse or defense for a fault that we may have committed. Saying “I’m sorry” or an apology, shouldn’t be difficult in a relationship of any kind. We all need to apologize, after all, no one is perfect. We all make mistakes, since but are all capable of hurting another person’s feelings through our behavior and our actions. No matter if it was intentional or not. Here’s a story, although minor, it shows how relationships can become damaged when someone can’t say that they are sorry.

Laura and Cara had been friends for over ten years. Over the years, Cara showed less and less interest with including Laura in her life. Birthdays, shopping, and other events; Laura found herself becoming more distant from the one person that she thought that she could call a friend. Laura was more reserved and lived a more quiet life compared to Cara and her ability to hold too many friends. On one particular birthday, Cara’s friends held a dinner for her. Laura realized that she wasn’t invited by any of Cara’s friends, and that was okay. When Laura asked her about it, Cara’s responses were “they are one of my best friends.” Getting such a response stung Laura.  She began to realize that all the while that Cara was calling her a “good friend,” it really didn’t mean much to her. It was at that moment that Cara took to Facebook to lash out at her. She had accused Laura of being offended, but that wasn’t even the case. It was a matter of hurt feelings. Cara wouldn’t do anything, not even apology for Laura’s hurt feelings. It was a tough decision, but ultimately, she had to end their friendship.

This is how sometimes relationships fall apart. One person does or says something hurtful. Rather taking responsibility for their behavior, they turn away from it and they don’t say “I’m sorry.” Imagine how those two words could make the difference to people going through a divorce or friendships that have gone sour. Think about all of the broken relationships that are out there, and how apologizing could change a lot of feelings, even give closure for some. There are many reasons why we, like Cara, should make a sincere apology when we’ve made a mistake.

An apology opens dialogue, a conversation, between yourself and the other person. It shows your willingness to admit your mistake without letting pride or ego get in the way. Apologizing gives the other person the opportunity that they need to communicate with you, and to deal with their feelings. When we apologize, we are acknowledging that our behavior wasn’t right. This helps to rebuild trust and re-establish your relationship with the other person. It also gives you a chance to discuss what had happened. A sincere apology builds self-confidence, self-respect, and a good reputation. When we apologize, we are able to feel a sense of relief and it’s the best way to restore integrity in the eyes of others. If your one of those people who think that apologizing isn’t worth it, or it isn’t necessary, think again. When we make the decision to not apologize we add further damage to our relationships. It negatively affects us and causes animosity, tension, and pain. Although, by expressing remorse, admitting to being responsible, making amends, trying to not let it continue to happen, and not making excuses; can be the beginning of forgiveness.

Apologies aren’t always easy. It takes courage to admit that we were wrong. You might feel embarrassed about your actions that you can’t bring yourself to face the other person. Or you may be following the advice of other people to never apologize. The ultimate choice is up to you. What is meant to be will be, but those two magic words: “I’m sorry” or “I apologize” could be what is needed to build strong relationships.